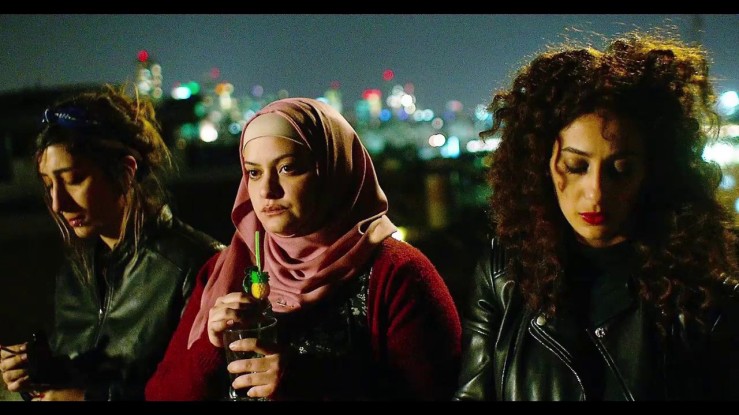 IN BETWEEN  Written & Directed by Maysaloun Hamoud

I adored the three women at the center of this movie: Salma, Nour, and Laila. Immediately, I felt as if they were my friends.

You meet Salma and Laila first, out dancing with their roommate who is about to be married. They head home to their apartment in the center of Tel Aviv, drunk and laughing, only to be awakened the next morning by an unexpected guest: Nour, a cousin of their bride-to-be roommate, who, unbeknownst to Salma and Laila, has been promised the extra room.

Nour is the opposite of Salma and Laila: she’s a devout Muslim in the midst of planning a traditional wedding. Her fiancé wants her to become a housewife, but she’s determined to finish her degree in computer science, and that’s what brings her to her cousin’s apartment, which is located near her university. She arrives at their apartment hoping to find quiet and convenience; her old apartment building was under construction and very noisy. But as she takes in her messy new surroundings and hungover roommates, she realizes she’s not going to find any peace and quiet. Yet she doesn’t turn away. She’s curious, and maybe a little lonely, too.

It’s an odd couple (in this case, threesome) situation that quickly blossoms into a deep friendship. What three women have in common is that they are stuck in between worlds, both as Palestinians living in Israel, and as independent-minded women trying to find a place for themselves within a patriarchal society. Their careers are full of negotiations: Nour’s Koran-quoting fiancé is constantly questioning her higher education, while Laila, a lawyer, seems to be one of the only women in her office. (I would have liked to see more of her at work.) Then there’s Salma, who DJs by night and works as a sous chef by day. In the kitchen, she’s reprimanded for speaking Arabic instead of Hebrew, because the patrons outside might overhear her. She quits her job rather than conform, and starts working as a bartender.

But the real trade-offs come in their personal lives. Nour’s romantic difficulties are obvious from the outset and quickly escalate, while Laila and Salma’s take a little longer to develop. Without spoiling anything, both women fall in love and both find that their love affairs cannot last, at least within the traditional definitions of marriage. By the end of the film, all three women have managed to free themselves from certain expectations, yet that freedom has not come without a cost. The last frame of the film, a portrait of the three women, is gut-wrenching.

I loved the energy of this movie. Even though the much of the action takes place in the roommates’ apartment, I never felt cooped up. The performances of the three leads are warm, unguarded, and funny. This is director Maysaloun Hamoud’s first full-length feature and apparently it’s “the first in a planned linked trilogy of films.” I really hope that the next two films include more of Salma, Laila, and Nour, because I love their company and am eager to see what is next for them.

1 thought on “Review: IN BETWEEN”