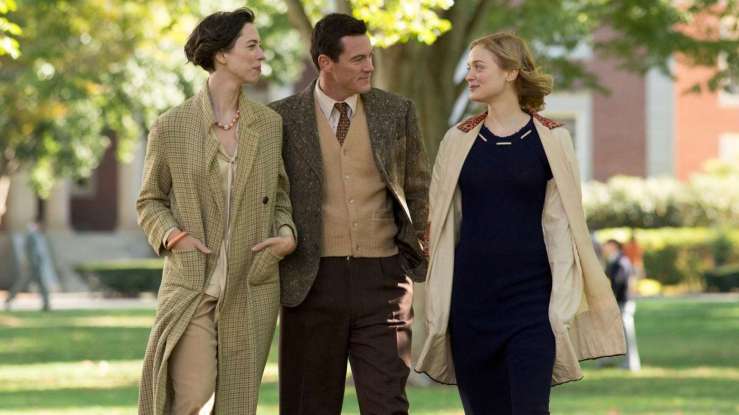 This movie has a terrible too-long title, but having seen it, I’m hard-pressed to come up with a better one. The only titles I could think of were longer: The Unconventional Life of Professor Marston and His Wonder Women. Or: The True Story of Wonder Woman as Told by its Under-Appreciated Creator, Professor Marston. Or: The Two Women Who Inspired Wonder Woman. Maybe it would have been better to go with something vague like Marston. I can’t be the only one who was confused when it was in the theater. I knew that it wasn’t Wonder Woman with Gal Gadot, but the “Professor” threw me off. Was it a campus movie? A biopic? A romance?

It’s a little of everything—romance, biopic, history—but what it really reminded me of was an episode of Radiolab. It’s got that same mix of earnest inquiry and historical detail, and brings together a variety of subjects and characters to illuminate a moment of human creativity/ingenuity. I’m not entirely convinced that it wouldn’t have been better as a podcast. Yet, I really enjoyed this movie, especially the three performances at its center—of yes, Professor Marston and his (two) wonderful women. I think people should see it. It’s just kind of confusing.

For the most of the film, I wasn’t sure what I was watching. There’s a weird frame on the whole thing, where Connie Britton grills Marston about his life, and how he came to write Wonder Woman, a comic which was banned because Marston wouldn’t “cut the kink.” For her role as strict interlocutor, Britton’s signature long hair is styled aggressively pinned into a cartoonish, 1940s updo that I became overly fixated on, I think because her interview felt unnecessary. I wondered why I needed her to orient me, when the narrative of the film is so straightforward. There’s no going back and forth in time, and the cast of characters is small. The point of the story is to show the various inspirations for the character of Wonder Woman, and it does that very clearly and simply. The only thing that is complicated in this movie is Professor Marston’s personal life—he’s in a monogamous threesome—and the lies he tells to maintain it.

About halfway through the film, I realized that it was a conventional movie housing a very unconventional story—much like the comic book Wonder Woman, which sneaks feminist ideas into a traditional comic book narrative. Aside from a Wonder Woman bathing suit I had when I was a kid, I don’t personally have a lot invested in the Wonder Woman franchise. I didn’t go to see Wonder Woman in the theater, and when I finally did see it at home, a couple of months ago, I fell asleep during the action sequences. That’s not a complaint about the movie’s action sequences, which were fine, I guess, it’s just that I wasn’t the right audience for them. I’m usually not a fan of action movies, and of superhero movies in particular.

The only reason I watched Wonder Woman is that my son loves superhero stuff and I figured if he’s going to watch all that macho nonsense, he might as well see a superpowerful woman. But I’m not so sure if seeing a female as the lead is that radical. It’s still a movie about one person with special powers who restores order to the world, usually by violent means and/or blowing stuff up. The world remains divided in the usual way: good guys v. bad guys. Where’s a movie about a huge group of people coming together and through the strength of their collective action, ridding the world of oppression? (Actually, I’ve heard that BPM fits that bill.) A movie like that would require some real vision.

Marston approached his life with imagination, and I admired how this film showed the distinctive mix of intellectual interests and life experiences that fed his idea of Wonder Woman. I was left with the feeling that Wonder Woman was a deeply felt work of art. Sadly, Marston’s original vision was censored, and for several decades, Wonder Woman wasn’t even allowed to have superpowers. Which is really crazy, when you think about it: the idea of women having power was so threatening that children were not allowed to see it in their comic books.