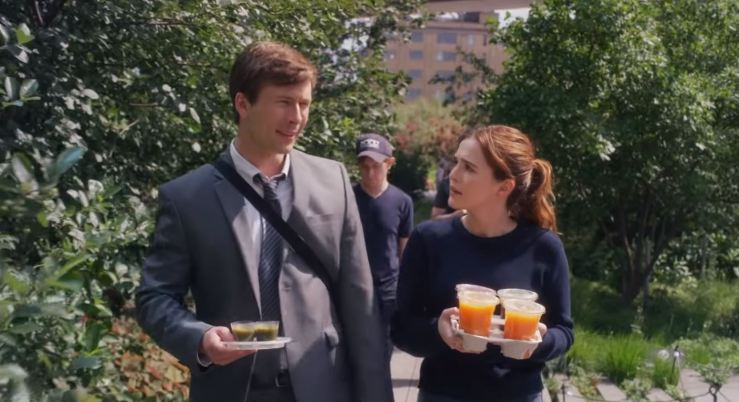 Enter Set It Up, a Netflix original movie that Netflix has probably already recommended to you if you watch sitcoms on its platform. I’m here to second that recommendation. It’s not a great movie, but it’s a fun, romantic comedy that is very happy to be one. The conventions are all in place: it takes place in New York City, and our star-crossed lovers work for vague, unnamed media companies.  The girl, Harper, works as a Girl Friday for the editor of a sports news website. The guy, Charlie, also works as a personal secretary for, hmm, I can’t remember what his boss does. It doesn’t matter! This movie is not making any important observations about the modern day workplace and that’s okay.

Harper and Charlie are part of the beleaguered assistant class. They meet in an elevator when Harper is desperately trying to secure dinner for her boss — or is it the other way around? Maybe Charlie is trying to get a dinner for his boss? I can’t remember. Point is, they meet cute. But of course they don’t realize that they are meant for each other. Instead, they decide to set up their bosses–or, as Harper puts it, “We’ll Cyrano them!” Their reasoning is that if their bosses start dating and fall in love, then they’ll stop working late. Harper wants more free time so she can try her hand at writing and reporting instead of ordering meals; Charlie wants more free time to spend with his supermodel girlfriend who treats him like old trash.

That’s as far as I’ll go into spoiler territory, but if you’ve seen a romantic comedy, you can spoil the whole movie for yourself with the mildest of guesswork. The one meta element of this movie might be the title itself, which might not only refer to Harper and Charlie’s plan, but also to the writer (Katie Silberman) and director (Claire Scanlon), who tee up the premise, then hit everything to par. (That might be a nonsensical metaphor. I don’t know much about golf, but wanted to use something sporty, because this movie has a lot of sports references.)

Lucy Liu and Taye Diggs play Harper and Charlie’s hard-driving bosses — two stars who, when I recommended this movie to a group of friends, brought swoons and questions of Where have they been? Harper is played by a very charming Zoe Deutch, and Charlie by Glen Powell, who seemed, at times, to be subbing in for that actor who always plays Nice Midwestern Guy. You know I mean. He was in Obvious Child, Girls, The Office . . . I just looked him up: Jake Lacy.  Glen Powell and Jake Lacy should be in a movie together, and one should be the boyfriend of the lead, while the other is the ex-boyfriend. I don’t know what the plot of that movie is. (Related, sort of: Lucy Liu and Taye Diggs are slated to work together again in an upcoming feature, Stage Mother.)

I only gave this movie two and a half stars on Letterboxd, which I mention not because I put huge stock in star ratings, but because it can sometimes help to clarify my recommendation. For me, 2.5 stars means that you’ll probably like the movie if you like its genre or if you’re a fan of one of the stars. I throw a lot of movies into this category, including the majority of Jessica Chastain’s movies. I also give a lot of movies 2.5 stars when they contain distinctive elements that don’t quite coalesce. Set It Up does come together, and each scene bounces quite nicely to the next, but it doesn’t have a lot of distinctive elements. It’s perfect for Netflix, because it doesn’t need a big screen, and it’s just the kind of thing you want to watch on a weeknight after a long day, when you need a break from reality — and prestige TV.