On Sunday I went to the New York Film Festival to catch a screening of Be Natural: The Untold Story of Alice Guy Blaché. This is a new documentary by Pamela B. Green about the first female film director, a young Parisian woman who began making films in 1897, just as film cameras were being invented and refined. Not only was she the first female director, it’s possible that she was the first narrative director, period. And yet, her contributions have been lost to history, while the achievements of the men she worked with have been lionized.

Co-written by Joan Simon, who curated an exhibition of Blaché’s films at the Whitney Museum, this is a documentary that aims to be accessible to someone who knows nothing or very little about Blaché — so, perfect for me. Although I’ve now seen a few of her films, I discovered her when I was looking for a title for this blog and wanted to find another female film pioneer to go with Thelma — preferably someone with a two-syllable name. Yes, my search was exactly that superficial, but sometimes the best bits of research are happy accidents.  Discovering Blaché has brought me back to the birth of cinema, something I’d never given much thought to — and it’s been a delight to find that someone like Alice was there at the beginning.

She was a secretary, supporting her mother, working at the Gaumont Film Company, where her boss was selling projector film cameras, a new invention. It was 1897. People did not know what the point of moving pictures was, beyond the novelty of it. Film companies like Gaumont made demonstration films to show what the camera could do: short reels of crashing waves, busy city streets, fairgrounds, transportation hubs, etc.

Alice, a young woman in her early twenties, saw the potential for entertainment. She asked permission to make a demonstration film. Her boss said, ‘Okay, as long as the mail doesn’t suffer.’

Her first movie was called The Cabbage Fairy. Clips of the film are shown in Be Natural, along with recovered scenes from some of Blaché’s other early films. Tragically, the majority of Blaché’s films are lost, so it’s a small miracle that this one survived.

The Cabbage Fairy is about a fairy godmother figure who plucks babies out of cabbages. Most of the babies are dolls but two are real live babies that look to be under six months! (Which begs the question, where did Alice get those babies?) It’s a very funny, very whimsical little movie, filmed in the garden behind the studio. Blaché made the costumes and a friend who painted fans helped with the set. The film was a huge success, so popular that other studios copied it and Alice herself made different versions of it over the next couple of years as she learned to master the camera. 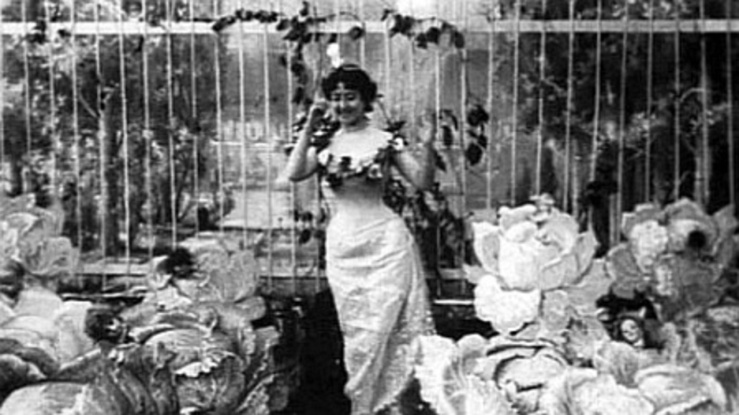 I’m going to dwell on The Cabbage Fairy for a little longer than necessary because it’s what I keep returning to when I think about Blaché’s particular genius. She would never call herself a genius, by the way — in a clip from a rare 1960s TV interview with Blaché, she observes that she never made anything “brilliant.” A film like The Cabbage Fairy may be a trifle but it shows that Blaché understood the way cinema can quickly and beguilingly invite the suspension of disbelief. The theater has its special, intimate relationship with its captive audience; novels bend time and draw upon the memories of its readers; but movies have the frame, that magic space that allows people to forget the reality outside — the cameras, the make-up, the lights — and to enter a whimsical world where babies might blossom from city gardens. “Movie magic” is a cliche for a reason, but Blaché made The Cabbage Fairy before the cliche existed. She was going by instinct, and her instinct was: this camera is fun!

One of her other early films was one called The Drunken Mattress, about a mattress that stumbles wildly down the street, of its own accord. There’s someone inside the mattress but it’s very cleverly shot so that it’s not that obvious how the costume works. There are complicated stunts, where the mattress falls off a balcony and tumbles down some very steep streets. It’s very funny, goofy slapstick. It’s also grounded in realism. The drunken mattress trips and tumbles in recognizable locations in Paris — and in one part of the documentary, a group of Blaché’s descendants take a walking tour to match film stills with particular spots in the city.

Realism was Blaché’s secret aesthetic weapon and it was what made her films come to life. Even in The Cabbage Fairy, the magic works because she filmed on location instead of a set or a stage. (Also, those real live babies! Squirming on the ground!) From the beginning, Blaché instructed her actors to ignore the camera and behave as authentically as possible  in imaginary circumstances. Her mantra was “be natural” and when she opened her own studio in Fort Lee, NJ, she emblazoned the phrase on a large sign that hung on set to remind actors of her sensibility. The idea of acting naturally for the camera is now the definition of good film acting, but at the time, there was no standard, and you could argue that she helped to define it. Obviously, she also defined the job of director, as she was among the first to coordinate film scenarios, actors, sets, costumes, title cards, music, etc. She experimented with sound films very early, and also with color, using hand tinting. Her films were what the first generation of Hollywood directors would have seen as children: Alfred Hitchcock mentions her by name as one of his earliest influences.

I’ve jumped way ahead in her biography, and the documentary jumps around too, as Green allows her viewers to see the research process unfold. Although this is Green’s directorial debut, her career has been in film production, directing title sequences and creating visual and graphic effects. As a result, Be Natural contains many graphics, maps, timelines, and animated sequences to orient the viewer and enliven static materials. I appreciated the graphic elements, but there were times when I felt the documentary was too process-oriented. A few of Green’s leads don’t amount to much, and I wanted more of Blaché’s life, or at least more historical context. At the same time, emphasizing the complicated logistics of the research shows how much of Blaché’s story has been lost.

The vast majority of Blaché’s films have been damaged, destroyed, and/or misplaced. Many of her films that did survive — including The Cabbage Fairy — were misattributed to other early (male) directors. The Gaumont Film company didn’t include her in its official history, and efforts to restore her name in the 1960s led to inaccuracies that Blaché herself tried to correct. It was maddening to see historians dismiss and ignore her, simply because she was a woman — and probably also because she was old. Even more maddening was the way film historians refused to change the record when confronted with their errors of omission.

The tragedy of Blaché’s life is how quickly she was erased, despite her accomplishments and enormous influence. Although she had a fruitful career in Paris and the U.S. she was affected, like everyone else, by war and economic depressions. Changes in the organization of the big film studios also left her in the cold, and she suffered a personal setback when her husband divorced her, leaving her for one of her lead actresses. Somehow, he also took her career, too. Finally, Blaché’s work was lost because she was such a pioneer, making movies before there was a word for what she was doing. When she started out, no one knew it was the beginning of a new industry, which is partly why a twenty-something secretary was given such free rein. There was no thought to historic preservation, and Blaché herself didn’t do much to save and store her work until she has already retired.

Be Natural is an attempt to correct the record but it doesn’t yet have distribution, despite a celebrity narrator, Jodie Foster, and a lot of celebrity cameos in the film — mostly female directors who don’t have much knowledge of Blaché, but are quite happy to learn of her existence. My one quibble with the film was the inclusion of so many directors and actors who didn’t have any particular expertise, though it did serve to illustrate how little known Blaché is, even to those in the industry. And if their inclusion helps to get the film into theater or on a streaming platform, I’m all for it.

The screening I attended began with a short film by Blaché about a little girl who is trying to save her sister by attaching leaves to a tree — a childish misunderstanding after she overhears the doctor predicting that her sister will die by the time winter arrives, ‘when the last leaf falls from the tree.’ It’s a funny little movie, with the poignant image of tied-up leaves blowing in the wind. It has a somewhat unbelievable happy ending, but it’s those futile paper leaves that stick with you, as good a metaphor as any for the way we sometimes make art to scare off death. Is it “brilliant” as Alice hoped? I don’t know. But it’s indelibly cinematic.

1 thought on “Review: Be Natural: The Untold Story of Alice Guy Blaché”