If you’ve been following this blog, you know that for the past year I’ve made a special effort to see movies written or directed by women. After the Harvey Weinstein revelations, I felt so sickened by the movie industry that I wanted to change my viewing habits to see more films made by women—not only to support women, but for my own viewing pleasure.

As I was putting together these lists, I asked myself how much they would differ from a top three list of all movies, regardless of gender, and I will admit that First Reformed, Roma, and Sorry To Bother You might have edged out some of the films on these lists. But, these films would definitely make any of my top ten lists—and that’s one of the reasons I limited myself to three films. One last caveat: I never got to see Happy As Lazzarro, Zama, and Let the Sunshine In, and judging from the critical response, these were great films that might have also made the list.

This movie, which focused on a father and a daughter who are arrested for camping in a public park, wasn’t about the precariousness of the social safety net, or the weakening American economy, or rural poverty, or the failure of the VA, yet it was so carefully observant of its characters’ circumstances that it ended up saying a lot about all those things and the state of our country right now.

I’m in that micro-generation right between Gen X and Millenial. Which means Sandi Tan is someone I would have worshipped when I was sixteen. Shirkers is about the movie she made when she 19, a film that was stolen from her, and partially recovered a few years ago. An incredible story, playfully told, about regrets, creativity, and vampiric mentors. I laughed, I cried, I got angry, I felt rueful. I loved it.

I Am Not A Witch, written and directed by Rungano Nyoni

Using oversized spools of thread, Nyoni shows how women are leashed to absurd beliefs, and unable to get free without endangering themselves. It’s funnier than it sounds, and set in an unnamed African country—but it could be anywhere.

The Tale, written and directed by Jennifer Fox

A mix of documentary and fiction that seemed to me to have more in common with literary memoirs than any other genre. Told from the present, the film is truly retrospective as Fox, a documentary filmmaker, (played by Laura Dern) looks back on an affair that she told herself was consensual, or at least interesting, but was in reality, abusive. It’s insightful about the gap between a child’s perception and an adult’s, and kind of a master class on the famous Joan Didion quote, “we tell ourselves stories in order to live.” Fox shows how the stories that allow us to survive are sometimes what keep us from understanding the truth.

I feel like this movie got an unfair beating from critics, especially those who wanted it to be some kind of feminist argument for better maternity leave policies or the dangers of post-partum depression. It wasn’t that movie—and I don’t think it made any attempts to be that kind of movie. Instead, it was a story about a middle-aged woman being in dialogue with her younger self. Maybe I’m just as guilty as the critics for projecting my own issues all over this movie, but I am the same age as the mother in this movie, and when I saw it, earlier this year, I was living at home with an infant and feeling kind of old. I found myself constantly looking back on my twenties in a way that I never have before—not exactly in nostalgia—but more like I wanted to talk to that person who was so stupid about so many things but at the same time, had a lot of energy and imagination and bravery. Tully plays out that fantasy in a startlingly literal way, and it’s one we haven’t seen on screen much, so maybe critics just didn’t understand what they were seeing. Now that I think about it, The Tale is also about wanting to talk to your younger self, and Fox uses similarly startling cinema magic to make that possible. Both films are about reaching across time to a person who has necessarily become mysterious to you.

Can You Ever Forgive Me? directed by Marielle Heller and written by Nicole Holofcener and Jeff Whitty, based on Lee Israel’s memoir 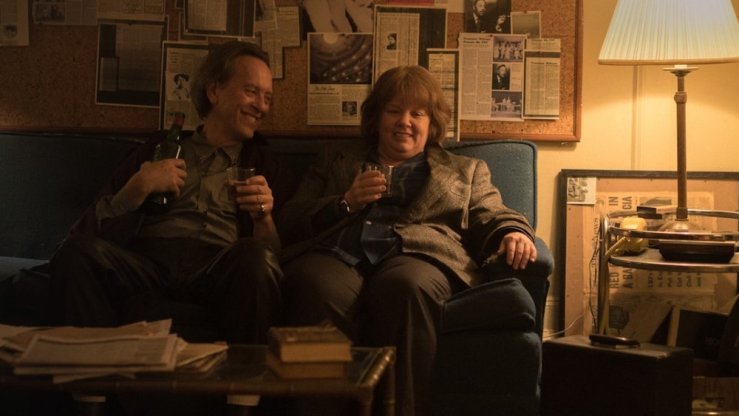 This screenplay had to dramatize literary forgery and somehow, it did. It also allowed Melissa McCarthy and Richard E. Grant plenty of time to exchange gossip, insults, and barely concealed flashes of desperation.