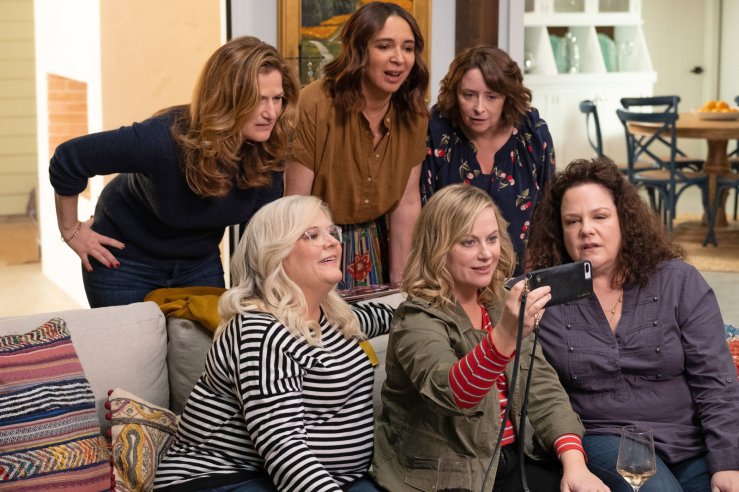 This movie was a like canned rosé wine: light, great for a picnic, and not very complex. You could do something else while you watch this movie — like get play cards and gossip with friends — and not miss much of anything. I really enjoyed it even as I can’t vouch for its quality.

I included it on my list of most anticipated female-directed 2019 films because the cast seemed incredible, full of female SNL-alums: Amy Poehler, Maya Rudolph, Rachael Dratch, Ana Gasteyer, Emily Spivey, and Paula Pell star as a friend group who go to Napa Valley to celebrate Rachael Dratch’s 50th birthday. Tina Fey  is their Airbnb host. The movie is directed by Poehler and written by Spivey, as well as Liz Cackowski, whose previous writing credits include Community and Funny or Die.

Apparently the premise is based on a real-life Napa Valley road trip that Poehler took with her SNL cast mates to celebrate a 50th birthday. I think this movie might have been funnier — and certainly a lot dishier — if the actresses had stuck closer to reality and played women who had come up together in the comedy world. Instead, their bond is that they worked together as young women as waitresses in a pizza parlor, but their midlife careers are so wildly divergent (and often vague) that you don’t understand why this particular group of women would have met in the first place, let alone worked in the same pizza parlor.

The subplots in this movie are very unsatisfying, but the vibe is fun, if unfocused. Maybe the problem is that there are just too many characters. Also, it’s confusing that Tina Fey isn’t part of the friend group, and instead plays Tammy, a socially awkward proprietor who pops into to scenes to do–what? Her role makes even less sense when Jason Schwartzman shows up the morning after the group’s first night at the house and announces that he’s the chef/tour guide who comes with the house. All the women wonder why Tammy didn’t mention him, while I wondered why Tammy was necessary when Schwartzman could have easily taken on her role in addition to his own, which is a little thin. (Schwartzman is quite funny, if not surprising, doing his usual off-kilter-possibly-a-robot thing.)

Still, there was a lot I liked in this movie. The gorgeous scenery, the rambling conversations, the physical comedy, and even the obligatory wine-tasting and hangover sequences. Cherry Jones shows up and does a very funny/terrifying Tarot card reading. Paula Pell made me laugh pretty much every time she opened her mouth. I like Maya Rudolph and Rachael Dratch, too, who weren’t laugh-out-loud wacky in the way you would expect, but gave pretty realistic performances of two women confronting middle age.

If you like these women, you’ll like this movie. To me, it’s perfect Netflix fare because I wouldn’t go to the theater for this one, but it’s a welcome retreat on Friday night–or at the end of a long weekday. Enjoy with it with popcorn and canned rosé.