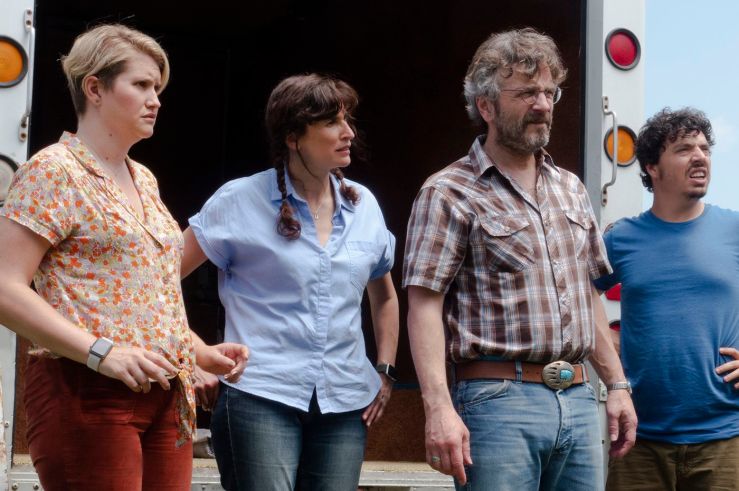 Many of the comedies I’ve seen this year have seemed slightly off, with contemporary settings that weren’t quite plausible or even fantastical in the right way– I’m thinking of Long Shot, Late Night, and Book Smart. I attributed that misalignment to the intense speed of the news cycle and the internet, and figured it was unavoidable, but Lynn Shelton’s new ensemble comedy, about a disturbing internet conspiracy theory, is so fresh and in tune with the current moment that it feels like it was made yesterday.

Sword of Trust is Shelton’s seventh feature film and stars Marc Maron, who I know best from his podcast WTF, but who you might know from his stand-up comedy or the TV shows GLOW, Easy, or Maron. I’m a big fan of the podcast and I think he’s perfectly cast in this movie about a pawn shop dealer, Mel, who is also a recovering addict. If you listen to Maron’s podcast, you know that his sobriety is a big part of his identity and he brings that personal experience to this part, but in a low-key, lived-in way that gives this movie, which is a bit of a shaggy-dog story, a certain weight and melancholy that it needs to anchor its themes of frayed community.

For me, the hallmark of the past few years is the sense that everyone is living in their own reality, constructed by the internet, which is becoming evermore attuned to our personal obsessions and fears. Sword of Trust isn’t explicitly about the internet, or even online culture, but it does reveal the niche economies and fringe communities centered around internet conspiracy theories. I don’t want to spoil any of the plot, which has some satisfying turns, but it centers on a Civil War-era sword that a couple, Cynthia and Mary, (Jillian Bell and Michaela Watkins) have inherited. The sword has a controversial backstory, and when they bring it Mel to have it appraised, they try to convince him that it’s worth a lot more than he realizes. It’s only when Mel’s younger colleague, Nathaniel (Jon Bass), researches the sword’s backstory on the internet, that Mel understands how much the sword could be worth. The four of them then team up to try to get the most money they can for the sword. Hijinks ensue.

The dynamic between the four leads is quite funny, but what I really liked about this movie was the way that it shows how abstract and frankly absurd ideas from the online world have material effects on the real world. The threat of violence hangs over the action in a real way, even as you know you’re in a comic world, where things are basically going to work out. This movies also reveals something important about Americans’ relationship to history. We’re a country that prizes reinvention, which is in many ways a great imaginative strength, and probably what makes us such great entertainers. But it also makes us susceptible to hoaxes, con artists, and conspiracy theorists, and keeps us from truly reckoning with our past.

Maron’s character is the moral center of this film because he’s willing to look honestly at himself and his past choices and to move forward in a realistic way. He’s not cynical, but he’s not sentimental, either, which is what makes him a good pawn shop dealer. When his ex-girlfriend stops, wanting to sell a ring, he won’t give her the money because he can see she’s still using. His heart goes out to her, and at the end of the film, he does what he can to help her without enabling her. It was an unexpectedly mournful ending, but there was something hopeful in his gesture, too. He’s still rooting for her, hoping she can face the reality of her addiction and find a way out.

1 thought on “Review: Sword of Trust”