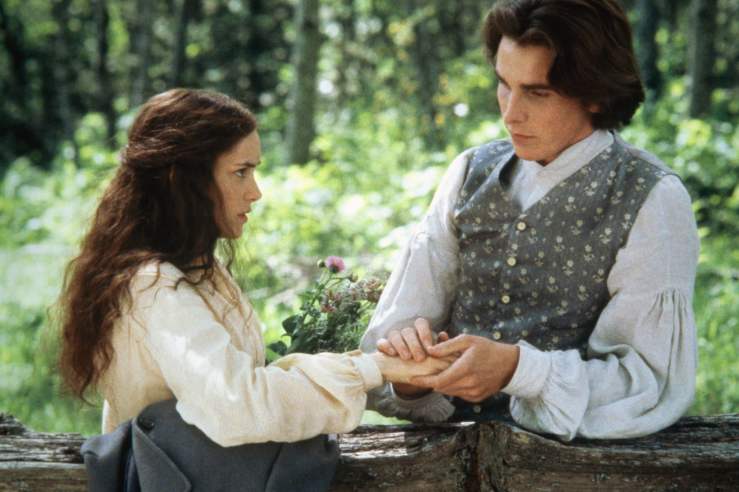 I decided to catch up with 1994’s Little Women as a way of preparing for Greta Gerwig’s forthcoming version. I saw it in the theaters when I was a teenager, but I’m sorry to say that it didn’t make much of an impression on me. The only reason I know I saw it is that my older sister, who remembers everything, tells me we went to see it in the theater with our mother.

I was 16 in 1994, which my mother probably saw as just the right age for a period romance. But it had to compete with the other movies burning into my adolescent cortex, a list that includes Pulp Fiction, Forrest Gump, Four Weddings and a Funeral, Reality Bites, The Mask, Priscilla Queen of the Desert, and Brad Pitt in Legends of the Fall.

There have been four film adaptations of Little Women, including Greta Gerwig’s forthcoming version. (I am only counting period adaptations, not modern updates.) The 1994 version was the first to be directed by a woman, Gillian Armstrong, an Australian director best known for My Brilliant Career. According to this recent New York Times article, “Little Women: An Oral History of the 1994 Adaption,” it was very difficult to get funding for a woman-centered movie. Winona Ryder was the linchpin. Once she was on board, the film got made. She also insisted on a female director.

Winona is too beautiful to play Jo, but she has an outsider spirit that works well in the role. Watching her reminded me of how much I loved having her as a star to look up to when I was a teenager. There are some other great nineties faces in this adaptation, including Eric Stoltz, who plays a version of the same character he plays in Kicking and Screaming; Kirsten Dunst, who is young and saccharine and a bit too cutesy but also undeniably a star; and finally, Claire Danes in the My So-Called Life phase of her career, radiating emotion and adolescent sincerity.

But the actor who I was really surprised to see in this movie was Christian Bale in the role of Laurie. I think of Bale as a sinister type, but he was utterly convincing as the sweet boy next door who falls in love with Jo. I wasn’t even sure it was really him when he first appeared because his affect was so friendly.

I’m focusing on the acting because it’s a movie that lives and dies by its ensemble cast. It makes me think that Gerwig was the perfect choice to direct a new version because she handled an ensemble so well in Lady Bird, and with her acting experience, she knows how to bring out the best in actors. Maybe I’m also focusing on the acting because it was the strongest part of the movie. There was something a little dusty about some of the other choices. The lighting was often dark and the scenes sometimes felt claustrophobic, especially in the first half of the movie when the girls were mostly traipsing about their house putting on bad plays. It got better as the girls got older and there were some other locations in the mix.

But perhaps the most telling thing about this movie is that I didn’t remember it as well as the book, which I encountered at a much younger age, and which contains images and moods that have stuck with me for three decades. At the same time, the movie reminded me of aspects of the novel that I’d forgotten or simply didn’t notice the first time around, so I’d like to revisit that, too, in the coming weeks.