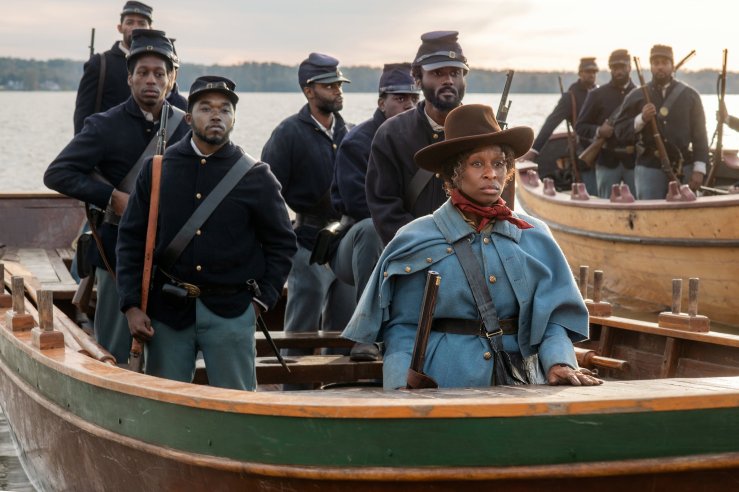 While watching Kasi Lemmons’s new biopic about Harriet Tubman, I found myself thinking of the 1979 novel Kindred by Octavia Butler. Kindred is a time-travel story, set in the mid-1970s in Los Angeles. The protagonist, Dana, an African-American writer in her twenties, has fainting spells that cause her travel back in time to antebellum Maryland, where she meets her enslaved ancestors. The first time she is thrown back in time, she finds herself in a situation where a white boy, Rufus, is about to die, and it’s up to her to save him. She does, only to discover that he’s both a distant relative of hers, and the son of a slaveholder. Luckily, she figures out how to get back to present-day L.A. But then, just as suddenly, she’s back in nineteenth-century Maryland.

At the core of Harriet, I see a story about a woman who is caught between two worlds in a similar way. As one of the most accomplished conductors on the Underground Railroad, Harriet Tubman went back and forth between free and enslaved America. She repeatedly traveled over 100 miles on foot from the Eastern Shore of Maryland to Philadelphia, an extraordinary feat of endurance and navigation, especially since she was subject to  “sleeping spells” that were likely due to a near-fatal head injury inflicted upon her as a child by an overseer. It’s these spells that first brought Kindred to mind, because in Harriet, they function as a kind of time travel, allowing Harriet (Cynthia Erivo) to see into the future and predict obstacles that would hinder her covert journeys, as well as longer-term historical changes afoot such as the Civil War. Like Dana in Kindred, her knowledge of the future is both strengthening and isolating.

As in Kindred, Harriet’s story unfolds in opposition to a young white man, Gideon Brodess (Joe Alwyn), son of a slaveholding farmer. In the opening scene, Harriet appeals to Gideon’s father to free her and her mother, according to a will left by Gideon’s grandfather, but he refuses, citing Gideon’s attachment to Harriet. When he dies, suddenly, with his finances in disarray (a similar plotline occurs in Kindred), Harriet and her family become the Brodess’s most valuable asset. It’s then that Harriet realizes she must go, but she returns several times to bring her family and friends to freedom. Each time she returns, Gideon becomes more agitated to learn that she’s been on the farm “stealing his property.” When they finally confront each other, their interaction is an echo of the first scene, except this time, Harriet has the power. She does not break free as definitively as Dana does at the end of Kindred, but as a viewer, the catharsis comes in knowing that she will become a legendary figure.

Kindred is a more imaginative and psychologically complex work than Harriet, which follows the Hollywood formula for heroic biopics, but I thought the similarities between the two suggested a slightly more complicated version of Harriet Tubman’s story lying in wait. I’m not sure if I’m hoping for another take on Tubman’s biography or if I just want Hollywood to make a movie of Kindred, already. I’m hardly the first person to suggest it, and apparently the book has been optioned many times. Whoever has it now: you’re sitting on cinematic gold.