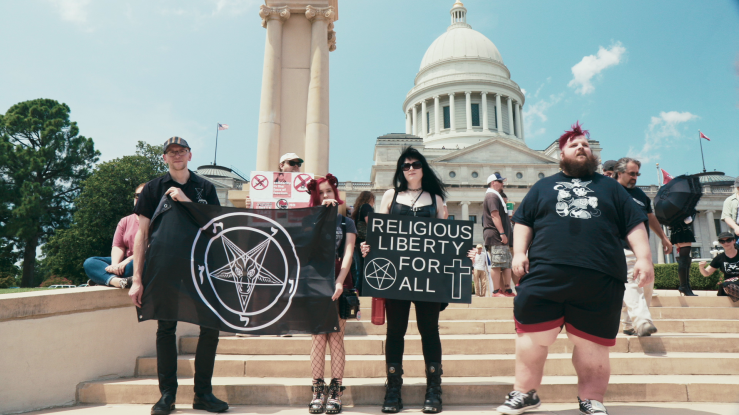 Oh my god, I laughed so much watching this documentary about the Satanic Temple. They are a group of people whose mission is to uphold America’s religious freedom. Any time someone tries to put up a Christian monument on public property, they are on the scene, asking if they can also put up their Satanic monument–only logical since we live in a country that allows all different kinds of religions, right? The result is that the Christian monuments get taken down.

This documentary about one of Macedonia’s last female beekeepers has gotten so much lavish praise that I expected to love it, but it felt a little opaque to me. It’s more of a parable about the dangers of unchecked capitalism than a distinct portrait of a woman, and for me, I was left with a lot of unanswered questions about the beekeeper’s life. The filmmakers chose not to use direct address, and they absent themselves from the film so that it feels more like a narrative film than documentary. This bothered me from time to time, and I wished the filmmakers would just interview her and ask some of the more obvious questions that were coming up — though apparently they didn’t speak the same language. Putting my complaints aside, the cinematography is stunning and the depiction of the daily life of children is very unusual and special.

The Edge of Democracy (2019)
Written & Directed by Petra Costa

This one is unrated because I couldn’t bear to finish it. I got about halfway through, but was too depressed watching a country’s democracy fall apart as our country feels like it is on the brink of disaster.

I didn’t realize this movie was co-written by a woman until the very end. She is the only woman to receive an Oscar nomination for original screenplay — surprise, surprise, it’s for a war movie. In general, I object to war movies because they glorify war but I have to admit that this was riveting. I saw it on a huge curved screen in a shopping mall, which is not my usual viewing experience, and that was, in and of itself, spectacular. The last time I saw a movie on a screen that big was at the American Museum of Natural History, where my son and I watched a National Geographic documentary about a guy who gets really close to active volcanoes. I think the volcano movie will likely stay me longer, because there was something a little bit generic about 1917. I would say it was like a video game, but when I said that to my husband, he was like, ‘Yeah, that’s what everyone is saying.’ For me, it was most like a video game in that while I was watching it, I was totally absorbed but now, a couple of days later, I wonder where the time went, and how I could have had fun watching something so devastating.