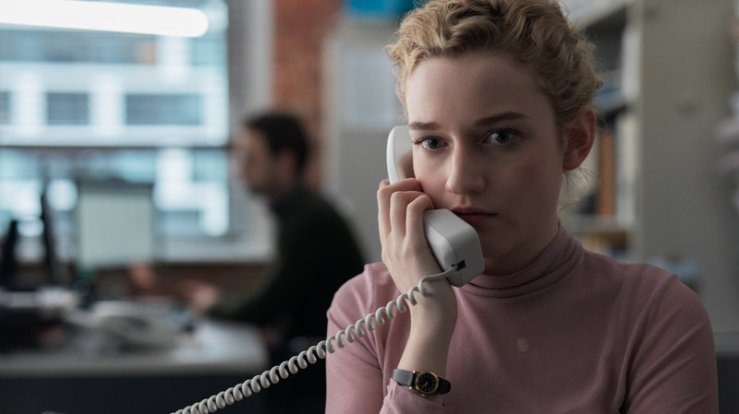 When I wrote the heading for this review I thought to myself wow, am I really giving this movie four stars? It’s the unusual instance when using a star rating system is clarifying rather than frustrating, because my reasons for rating it as less than four stars were entirely superficial. In terms of its production, The Assistant it is a “small” movie, but in terms of its themes and emotional impact, it’s huge. It takes place over a short time period — one day — and involves only a handful of people in a few rooms, with its focus on Jane (Julia Garner), a junior assistant to a film producer. Very little happens and there is hardly any dialogue; there’s only one passage in the film in which two characters engage in extended back-and-forth discussion. All other verbal communication is limited to short or one-sided phone conversations, emails, and eavesdropping.

Before I continue this review, I have to say that I worked as an executive assistant at a corporate law firm for five years and WOW did this movie bring me back. It literally gave me nightmares: the night that I saw it, I dreamed I was at my old cubicle station and someone stole my laptop computer with all my writing on it. I mean, how obvious can a dream get? I never felt like I had a voice of my own when I was working there, and I think that’s something that The Assistant captures well, not only in the lack of dialogue, but in the way that Jane is groomed to be silent.

In The Assistant, we see an important phase of this grooming when Jane witnesses something she doesn’t feel comfortable with, and complains about it. The one extended conversation is between her and HR manager (Matthew Macfadyen) who reframes her complaints as misguided, destructive, and short-sighted. When she decides not to file a report, she is welcomed back into the fold with such a bizarre mix of anger and camaraderie that she knows she’s been asked to make a deal with the devil. The question becomes: is Jane, like everyone else at the company, willing to make this bargain? Chillingly, the HR manager tells her it doesn’t even matter what she decides, because there are 400 people lined up to take her place.

Recently, a friend of mine told me about the experience of pitching a book to a film producer; she said that one of the most disturbing things was receiving emails from an address “Assistant 1” and “Assistant 2.” This generic labeling practice is apparently common, and a matter of convenience for executives with a large support staff, but it’s also a way to communicate your expectations to your assistant: be anonymous, be invisible, do not expect credit for the work you do; do not even expect anyone to know the work you do, especially not me, because I cannot be bothered to learn what I need, that’s how I became successful, by not paying attention to my own humanity or the humanity of others.

The reason I had nightmares after seeing The Assistant, and not, say, Working Girl, is that the movie shows, in excruciatingly realistic detail, exactly what assistants do, which is a series of maintenance tasks executed to particular and exacting specifications that no one ever explains to you. Praise is doled out strategically and sparingly, but when you make a mistake you find out right away. One of the most painful details in The Assistant is the way that the film producer never speaks to her face-to-face. Instead he berates her over the phone or via email, even though he is just a few yards away in the next room. That might seem like something done for dramatic effect, but in my experience that’s typical. There’s rarely direct confrontation; it’s all passive aggressive, covert, and quiet.

I am writing this on the day that Harvey Weinstein was convicted of sex crimes, and the parallels between Weinstein and the unnamed executive in this movie are obvious. It’s an extremely powerful portrait of how a corporation can encourage a culture of abuse, but it’s subtle in the way that is shows how this culture exists outside the walls of this office, as well. There is no one who tells Jane, or even hints, that there might be more to life than achieving your career goals — not even her parents, whom she speaks to twice over the course of her day, and who clearly love her and are proud of her. It’s easy to see why she might continue to work in such a toxic atmosphere, but The Assistant, to its credit, doesn’t let us know what Jane ultimately decides. Instead, it shifts the narrative from one of individual responsibility to a bigger story about power, and how those in power evade responsibility for their actions.

5 thoughts on “Review: The Assistant”