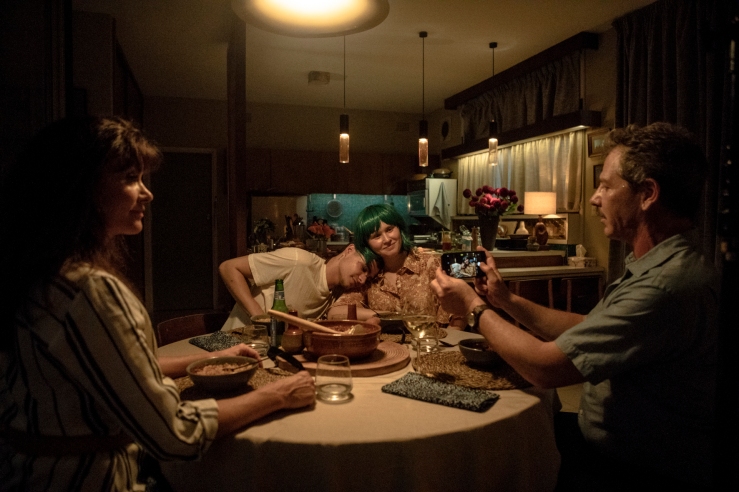 It’s hard to know, at first, what is amiss in the well-to-do Australian household at the center of Babyteeth. We first meet the daughter, Milla (Eliza Scanlen), standing on a train platform in her private school uniform, waiting with her friends at the end of the school day. When a feral-looking young man in grubby clothing jostles her, it seems at first that she’ll be scared, or at least irritated. Instead, she’s enthralled, and brings him home to her parents. It’s clear that he’s too old for her, and possibly a drug dealer, but Milla’s mother (Essie Davis) has taken so much anti-anxiety medication that she can’t focus on her daughter’s unusual guest. The father (Ben Mendelsohn), a psychiatrist, is equally distracted — he’s secretly dosing himself with morphine and nursing a crush on a pregnant neighbor in her third trimester. She’s the movie’s clock. But what are we counting down to? What bomb is about to go off?

It’s not much of a spoiler to say that Milla has cancer. Her chemotherapy treatments are announced via on-screen title, in an early scene. There are titles throughout Babyteeth; the very first scene is labeled: “When Milla Met Moses On Platform 4”. Another early scene is subtitled: “Insomnia.” Another: “Gidon’s Music Class.” Although the titles were frequent, you never knew when they would show up, and I liked the way they lent a playful, poetic tone to a story that is almost too sad to contemplate. A teenager with cancer seems like a law against nature, and it’s heartbreaking to watch the parents struggle with the reality they’ve found themselves inside. Milla’s scenes are easier to bear. She’s still young despite her circumstances, and she wants to have fun and experience life. At first it seems that her relationship with Moses is about rebellion. Then it seems like a stab at first love. Eventually, it evolves into something deeper and more surprising.

I really don’t want to say too much about what happens in this movie. One of its pleasures is that there’s something a little bit chaotic about the way it unfolds. You never know exactly where it’s going but it always rings true. The low-key unpredictability feels like an accurate reflection of the family’s emotional state as they reckon with a future they never planned for. Based on a play by Rita Kalnejais, it has been beautifully adapted to the screen by director Shannon Murphy, whose attention to color and light create vibrant domestic scenes that express the Milla’s youthful spirit. She lets the camera rest on Scanlen’s expressive face, and occasionally allows Scanlen look directly into the camera, as if letting the audience in on a secret. Over time, you realize that Milla is living in her own truth, separate from her parents and separate from her school friends; Moses is the only person who seems willing to meet her there.

Finally, I want to mention the soundtrack, which I looked up on Spotify as soon as I finished the movie. It’s an eclectic mix of popular and classical music, which reflects both Milla’s youth and the importance of music to Milla’s mother, who plays classical piano. Milla plays violin, and takes lessons with Gidon, her mother’s former teacher. Some of the warmest scenes in this movie take place in “Gidon’s Music Class,” a place where Milla is treated like any other teenage girl who has music practice after school. In an early scene, Gidon plays a record for her that he thinks she’ll like, and she dances to it with abandon. You get the sense that Gidon’s little room — and maybe talking to Moses — is the only time Milla truly feels at home.