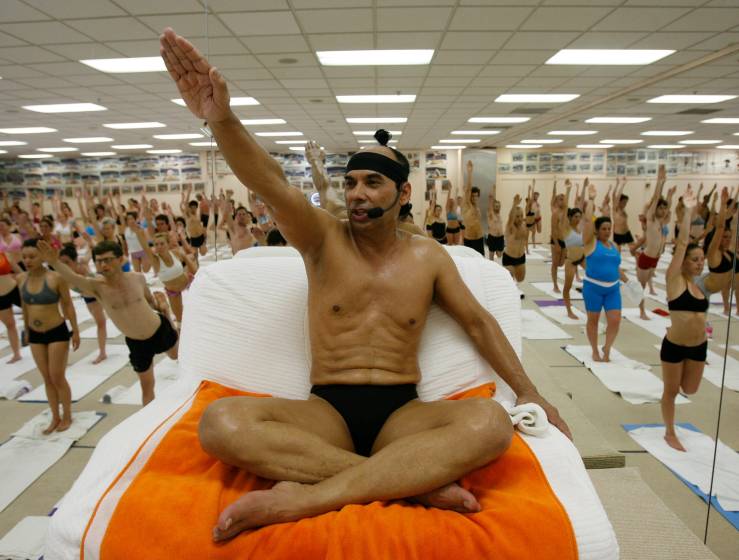 The corrupt guru is a tricky character, because he often imparts knowledge that is good. Bikram Choudhury was your classic bad guru: hypocritical, greedy, domineering, and cruel, but his “hot yoga” routine was so popular that people were willing to overlook his bullying style, which was peppered with racist and sexist taunts. This changed in 2013, when several women filed charges against him for rape, sexual assault, harassment, and discrimination. Their accusations, along with allegations of racism and homophobia, threw the Bikram yoga world into turmoil as devoted students and Bikram studio owners rushed to defend him. Others were disgusted and cut ties to him altogether. Bikram, meanwhile, fled the country after being convicted for unlawfully firing his personal lawyer, who tried to address his harassment.

END_OF_DOCUMENT_TOKEN_TO_BE_REPLACED

I don’t have to tell you, the news is bad. Public school is crumbing, the polar bears are going extinct, and my brain is melting from the heat and the constant interruptions from my children and WFH husband. Also my computer died. And our car broke down. I got my novel back from my agent and I have a lot of revisions. I knew I would have to revise and under normal circumstances, I’d be rubbing my hands together. But now I’m just like, how? When? In what universe? Is anyone even reading books anyway? (Actually, I am! Shout out to reading! It’s a great escape.)

For all these reasons and many more, I’ve been wanting to watch movies with a little sweetness to them, and preferably a happy ending. So, here are some of my favorites from the past few weeks. I included star ratings to temper expectations: most are in the 2-3 range and it’s possible that I overrated a few of them just because I need something light-hearted. The point is, I’m not making any grand claims for their quality. But they might distract you from the news for 90 minutes, and give you a good night’s sleep without any nightmares.

END_OF_DOCUMENT_TOKEN_TO_BE_REPLACED

The first time I heard of Roy Cohn was when I read Angels in America. He’s the play’s villain, lifted from real life, a ruthless fixer and corrupt lawyer who denies that he is gay but then uses his influence to obtain experimental treatments for HIV in order to prolong his life. Abusing power was Cohn’s thing: he started his career by tampering with evidence so that the Ethel and Julius Rosenberg would be sent to the electric chair for espionage. After the Rosenberg were executed, their children were adopted by the Meeropol family. Director Ivy Meeropol is the granddaughter of the Rosenbergs, and she is understandably interested in Cohn, this person who destroyed her family in order to show the world that he was tough on communism — and to gain personal notoriety.

END_OF_DOCUMENT_TOKEN_TO_BE_REPLACED

It’s hard to know, at first, what is amiss in the well-to-do Australian household at the center of Babyteeth. We first meet the daughter, Milla (Eliza Scanlen), standing on a train platform in her private school uniform, waiting with her friends at the end of the school day. When a feral-looking young man in grubby clothing jostles her, it seems at first that she’ll be scared, or at least irritated. Instead, she’s enthralled, and brings him home to her parents. It’s clear that he’s too old for her, and possibly a drug dealer, but Milla’s mother (Essie Davis) has taken so much anti-anxiety medication that she can’t focus on her daughter’s unusual guest. The father (Ben Mendelsohn), a psychiatrist, is equally distracted — he’s secretly dosing himself with morphine and nursing a crush on a pregnant neighbor in her third trimester. She’s the movie’s clock. But what are we counting down to? What bomb is about to go off?

END_OF_DOCUMENT_TOKEN_TO_BE_REPLACED

After a few years of cutting back on TV so that I would have more time for movies and books, I’ve been watching more of it. Blame quarantine. But one thing I really like about television is that there are a lot more female writers and directors. Women seem to be given more free rein in television, I guess because it’s seen as a less risky financial investment, or maybe because there is such a need for streaming content that networks are willing to take a chance on women. Who knows. In any case, my many of my favorite shows over the past few years have been helmed by female showrunners — shows like Marvelous Mrs. Maisel, Catastrophe, Transparent, and of course Fleabag.

I realized the other day that my current favorite shows are also written and directed by women, so I thought I’d write about them here . . .

END_OF_DOCUMENT_TOKEN_TO_BE_REPLACED

This gentle indie about a father and a daughter who live on the road had a lot of warmth and many likable performances, but ultimately felt too pat as it shied away from the more painful aspects of its story. The ending, in particular, felt like more of an Instagram moment than a resolution. Still, I enjoyed the journey with its glimpses into the lives of people who exist on the edges of mainstream society.

END_OF_DOCUMENT_TOKEN_TO_BE_REPLACED 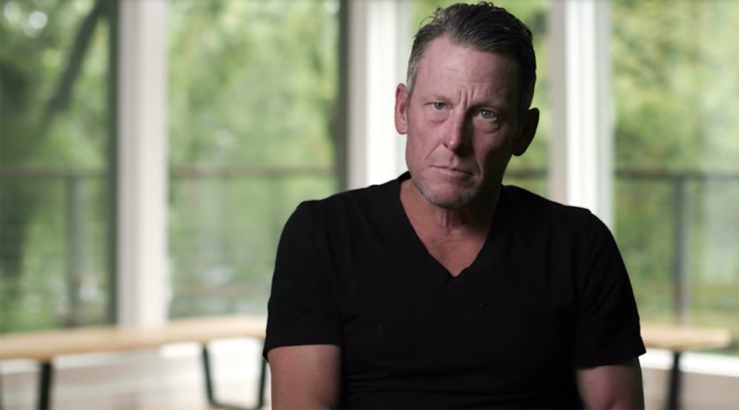 I think I miss sports. I wouldn’t have guessed that I’d have this reaction to quarantine life, because I never deliberately watched sports or followed any particular team. But I guess I picked up on the ambient noise of sports, the dramas unfolding in the background. Armstrong’s story, for example, was one I knew, even though I don’t think I ever read an article about him or followed the Tour de France. In fact, I don’t think I understood how grueling an endurance event the Tour de France is until I watched this documentary. Now I’m in the weird position of feeling newly in awe of Armstrong’s athletic abilities while also understanding the full extent of his doping, lying, and bullying.

END_OF_DOCUMENT_TOKEN_TO_BE_REPLACED

Last year, along with ten million other people, I read Michelle Obama’s memoir, Becoming. I picked it up expecting to get the inside story on what it’s like to live in the White House as First Lady, but Mrs. Obama doesn’t spend a lot of time on her years in Washington. Instead, she focuses on what grounds her: her family, her upbringing on the south side of Chicago, her education, and the early years of her marriage before Barack Obama was elected president. This turns out to be much more interesting and illuminating than anything she could have written about living in the White House.

One of the refreshing things about Becoming (both the memoir and documentary) is how open Michelle Obama is about the challenges she faced in her career and marriage, as well as on the campaign trail. It’s not only that she talks about her struggles, it’s that she describes what she did to address each difficulty. She gets specific about the little, day-to-day things, like how she found time to go to the gym or feed her children healthy meals. The truth, she explains, is that she often had help, and she gives a lot of credit to her mother, as well as her staff and assistants. The book had a self-help aspect that felt generous to her reader, a way of saying: look, it took a lot of work to become the person I am today, I’m not naturally this calm, cool, and collected.

Still, it’s clear that Michelle Obama has a lot more discipline and grit than most mortals.

END_OF_DOCUMENT_TOKEN_TO_BE_REPLACED

How To Build A Girl (2020)
Director: Coky Giedroyc
Writer: Caitlin Moran (based on Moran’s novel)

I know many people believe it’s always best to read the book before the movie, but I’m on the fence. Very often, the book outshines the movie by a long shot — especially if you read the book shortly before seeing the movie, as I did with How To Build A Girl, which is based on Caitlin Moran’s 2014 novel by the same title. I loved the book, loved its early 1990s setting and its teenage heroine, Johanna Morrigan, a working-class girl who is obsessed with sex and books and writing. She’s a girl so sure of her literary talent that she auditions to be a rock critic without knowing a thing about rock music. She gets CDs from the library to catch up and invents a rock critic persona, “Dolly Wilde.” Soon, she has a full-time magazine job, and is going to concerts, meeting rock stars and having lots of sex. It’s very, very fun reading. And then at the end, you cry!

So, look: the movie had a lot to live up to . . . END_OF_DOCUMENT_TOKEN_TO_BE_REPLACED

Easter Cove, Maine seems like a picture perfect postcard of New England, complete with fishermen singing traditional sea shanties like “Blow the Man Down” and kindly old ladies who take fitness walks together every morning. But look a little closer and you’ll see the quaint old inns and weathered docks hide murder, prostitution, and money laundering. And those old ladies out walking? They’re patrolling, not exercising. Don’t cross them!

I don’t want to give too much away about this extremely entertaining noir, which was thrilling enough to keep me watching, but witty enough to quell any anxieties. Directed and written by a debut team, Bridget Savage Cole and Danielle Krudy, it’s stylized just enough to wink at the viewer and create visual interest, but not so much that the world seems fake or glib. I noticed that early reviews compared it to the Coen Brothers, but I kept thinking of writers like Alice Munro and Elena Ferrante, authors who bring you into the unseen and ignored realm of women to show you the covert ways girls and women learn to deal with criminality and abuse. As one character says, “A lot of people underestimate young women. That’s why they get away with a lot.”

The cast is marvelous, and makes excellent use of veteran actors like June Squibb and Margo Martindale. I also enjoyed the performances of his younger leads, Sophie Lowe and Morgan Saylor. If you’re looking for something to take your mind off the news, this is a great weekend watch. I’m eager to see what these filmmakers do next.

Thelma and Alice
Blog at WordPress.com.