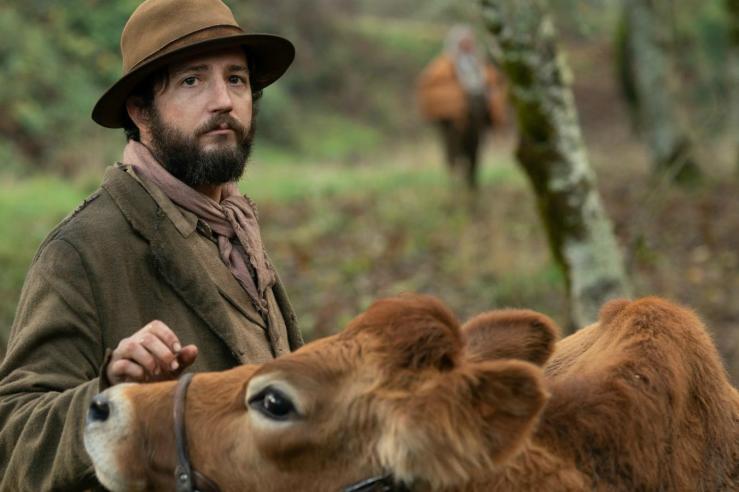 The plain title of Kelly Reichardt’s eighth feature film belies a richly–detailed period piece set in 1820s Oregon Territory. But before immersing you in the past, Reichart opens in the present, with a shot of alarge industrial ship making its way down the Willamette River. Along a piece of undeveloped shoreline, a woman and her dog are walking when the dog’s playful digging uncovers a human skull. Curious, thewoman continues digging to reveal two full skeletons lying next to each another. As is typical of a Reichardt movie, this action unfolds wordlessly but with attention to the sounds of the natural world: the chirping of nearby birds, the dog’s panting and scuffling paws, and the river flowing by. This quiet, observational approach makes the discovery of two skeletons feel interesting, rather than ominous. However, I must admit that what I found most arresting about this scene was a lightweight pink scarf that the woman was wearing tied around her neck in a loose bow. It was the only warm color in a scene dominated by grays, blues, and greens, and as the woman’s scarf fluttered in breeze, I felt that it, as well as the skeletons, had a secret meaning. . .

Read the rest over at The Common