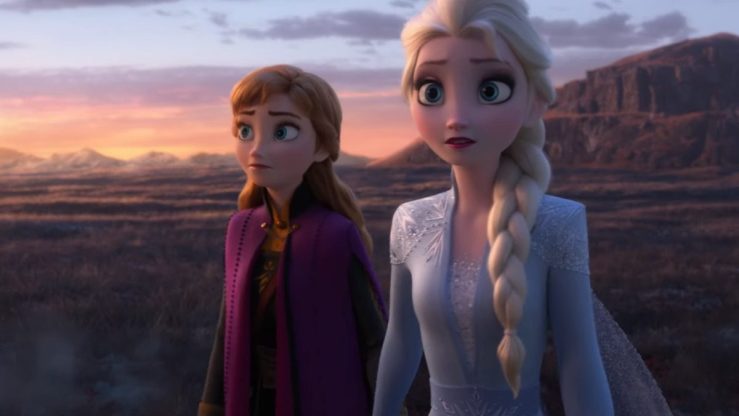 Over the weekend, our entire family went to 9:15 a.m. screening packed with Frozen devotees. It was an all-ages show, which probably sounds like hell to many but there was actually a childless couple behind us in line, so I guess it’s not too noisy – or else they really, really wanted to see the sequel to Frozen and couldn’t fit it in at any other time. I have grown to like the all-ages screening, in part because they turn the sound down, but mainly because it’s sweet to hear kids responding to what is on screen, especially a movie like this one, which was For The Fans.

If you want my two-second review, Frozen II was a lot of fun but not a great sequel, on par with Toy Story 2 or even, um, let me see here, I realize I haven’t actually seen a lot of sequels to kids’ movies. My relationship to kids movies is, generally: something to put on while I clean and I need my children to stay in one place. However, I have a soft spot for Frozen. END_OF_DOCUMENT_TOKEN_TO_BE_REPLACED

The Souvenir, British director Joanna Hogg’s fourth feature film, is the first part of a two-part memory piece that focuses on a love affair that took place in Hogg’s early twenties, when she was in film school in London. Though not quite a memoir, the film is unabashedly autobiographical, and similar to Alfonso Cuaron’s recent Roma in how it seeks to reconstruct a particular period in the director’s life. To play a version of herself, a young woman called Julie, Hogg has cast Honor Swinton Byrne, a newcomer who at this point in her life is best known as Tilda Swinton’s daughter—though her performance in The Souvenir and next year’s sequel will likely change that. Swinton herself plays Julie’s mother, Rosalind, tamping down her usual charisma to embody a meek matron who rarely exerts her influence or reveals her knowledge of the world. It’s startling to see Swinton this way, especially with Byrne nearby, exuding youth and curiosity. With her height and her red hair, Byrne looks enough like Swinton to bring to mind her mother’s glamour, but also has a calm dreaminess that it is all her own.

Hi, I’m back from summer break! I thought now would be a good time to revisit my master list of 2018 movies directed and/or written by women. I’ve been updating it all year, but I’m reposting now because a lot of the women-directed films that premiered during winter and spring film festivals have been slated for release this fall. I’ve also added a new section at the bottom, “2019 Preview” which includes some of the women-directed films premiering early next year. I’ll post a more expansive 2019 Preview at the end of the year, and I’ll still continue to update this 2018 list over the next few months.

As with the previous post, I’m sure this list is missing some titles. If you know of any I’ve missed, please leave a comment or email me. I’ve focused mostly on narrative films, but I threw in a few documentaries that were of personal interest to me.

END_OF_DOCUMENT_TOKEN_TO_BE_REPLACED

I just learned, via Manohla Dargis’s excellent review, that BAM Cinematek will be showing films directed by Alice Guy Blaché, one of the namesakes of this blog. She’s believed to be the first female director, and a person who helped to shape cinema from its earliest days. Her films will be shown on Saturday as part of a series, Pioneers: First Women Filmmakers.

Because her movies are so old, dating back to the 1910s, and it didn’t occur to me that I would ever have the chance to see her films outside of a museum. So, I’m thrilled that I’ll have the chance this weekend. They’ll also be available this fall in a boxed set produced by Kino Lorber and the Library of Congress. (The photo above, by the way, is of Alice on her wedding day, borrowed from the website of the author Alison McMahan, who has written a scholarly study of Blaché’s films.)